You can find the answers to frequently asked questions regarding WALTR PRO below.

What are the main tech requirements for WALTR PRO (minimum OS supported)?

WALTR PRO requires a computer with:

Yes, we do support screen-reader software with WALTR PRO. Indeed, the support of screen reader technology is important for Softorino as our goal is to bring the functionality of WALTR PRO to the highest level of comfort for all of our potential and current users. Our team has added support for NVDA and JAWS (for Windows), as well as VoiceOver (for Mac) screen reader software so that you don't need any further technical upgrades on your Windows PC or Mac.

How to transfer photos/pictures to iPhone with WALTR PRO?

With WALTR PRO it is possible to transfer pictures to alternative apps only. Just hold the Alt (Windows) / Option (Mac) button while dropping the files to the WALTR PRO app, and then choose the application where you want your pictures to be imported.

How to edit metadata and cover art?

To edit metadata and cover art with WALTR PRO, drag and drop the files and hold the following keys:

On a PC: Drag and drop files while holding the Ctrl key.

On a Mac: Drag and drop files while holding the Command (⌘) key.

Can I install WALTR PRO on my iPhone or iPad?

No. You can only install WALTR PRO on your computer. You can transfer files from Mac or Windows PC to Apple devices (iPhone, iPad) via USB or Wi-Fi.

WALTR PRO supports all iPhone, iPad, and most iPod models starting from iOS 5.

How can I upgrade to WALTR PRO?

If you are a paid user of WALTR or WALTR 2, you can upgrade to the PRO version with a 50% discount at our Store. Note that it's only available for the 1-year subscription license.

Yes. WALTR PRO provides a 24-hour free trial. You can download and try it here.

Are there any limitations in the trial version of WALTR PRO?

Yes. From the moment you activated the trial, you will have 24 hours to test the app with the following limitations*:

*Even after the trial period — you still will be able to move any file to different apps on your iOS device’s alternative apps.

Do you have any discounts on WALTR PRO?

Currently, we offer a 30% discount for students and the military. Send us your .edu email address or military ID to retrieve the coupon code using our contact form here.

Can I buy WALTR 2? Will it be supported?

Can I activate one WALTR PRO license on more than one computer?

No. One WALTR PRO license can be used on one computer only. However, you can get as many licenses as you need: for 1 computer (a single license), 2 computers (a double license), and 5 computers (a family pack). All these options are available at our store.

How can I set up my WALTR PRO license on another computer?

If you bought a new computer and want to activate a license there, you need to reset the license on your old computer in the first place. You can reach our Support Team via the Contact form for additional help.

Where can I find my license key?

After you bought the app, you will receive an email with an activation code. If you haven’t received it into your Inbox — please check your spam folder. If you still can’t find your key — you can visit our License Retrieval page or alternatively, send us an email via the Contact page and we will reset your key as soon as possible.

I have a Mac and a PC, do I need to purchase 2 licenses?

Yes, you can use one WALTR PRO license on one computer only. But if you need a license for both Mac and Windows PC, you can purchase a Mac/Windows combo bundle for a discounted price. You can contact our Support Team to get a discount.

I lost my WALTR PRO license, how do I recover it?

If you have lost your WALTR PRO license, you can retrieve the license key here.

How to enable Wi-Fi connectivity on a Windows PC?

With High-Speed Wi-Fi connectivity – WALTR PRO brings a new dimension to freedom. As soon as you open WALTR PRO, it instantly looks for any Wi-Fi-enabled iOS devices around you and connects to them.

Before you enable it, make sure your iOS device and computer are connected to the same Wi-Fi network. 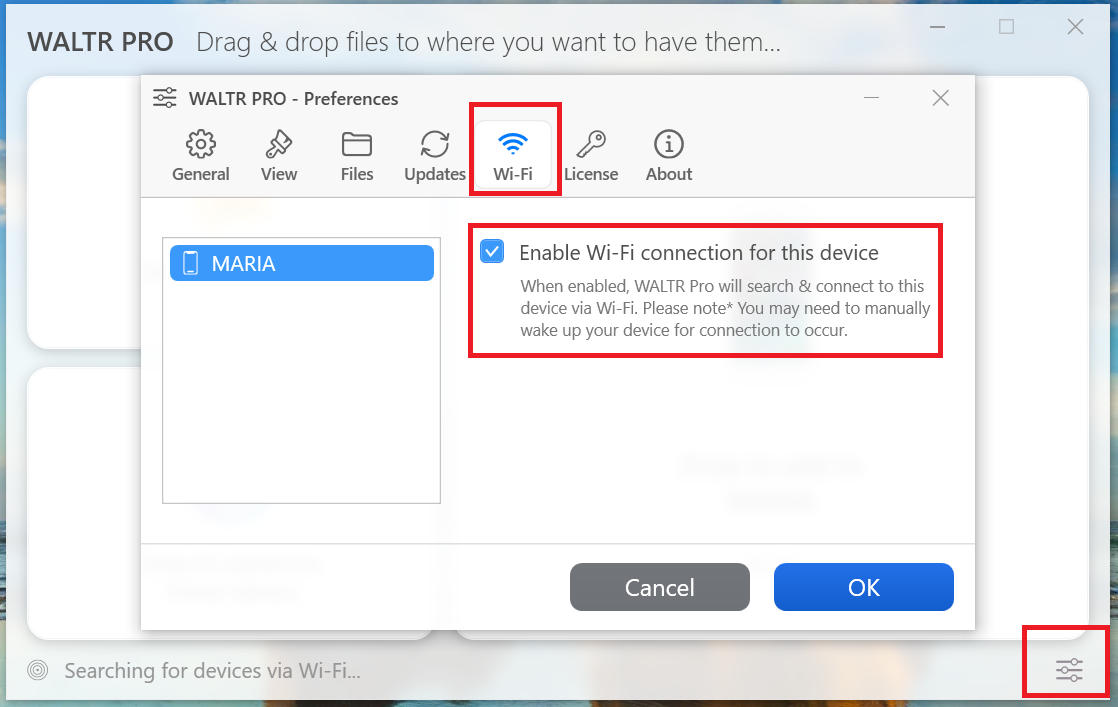 What are the alternative 3rd-party apps that are able to receive files?

With WALTR PRO, you can transfer files to both native Apple apps and 3rd-party ones. You can now push virtually any type of content in any format into your iPhone or iPad.

The “Drop to convert” option allows you to convert and transfer media files such as video and audio. The difference is the destination where the files go.

Where do my files go after being transferred with WALTR PRO?

You can see where your files end up right in the app by clicking on "Where are my files?" after the transfer is complete. 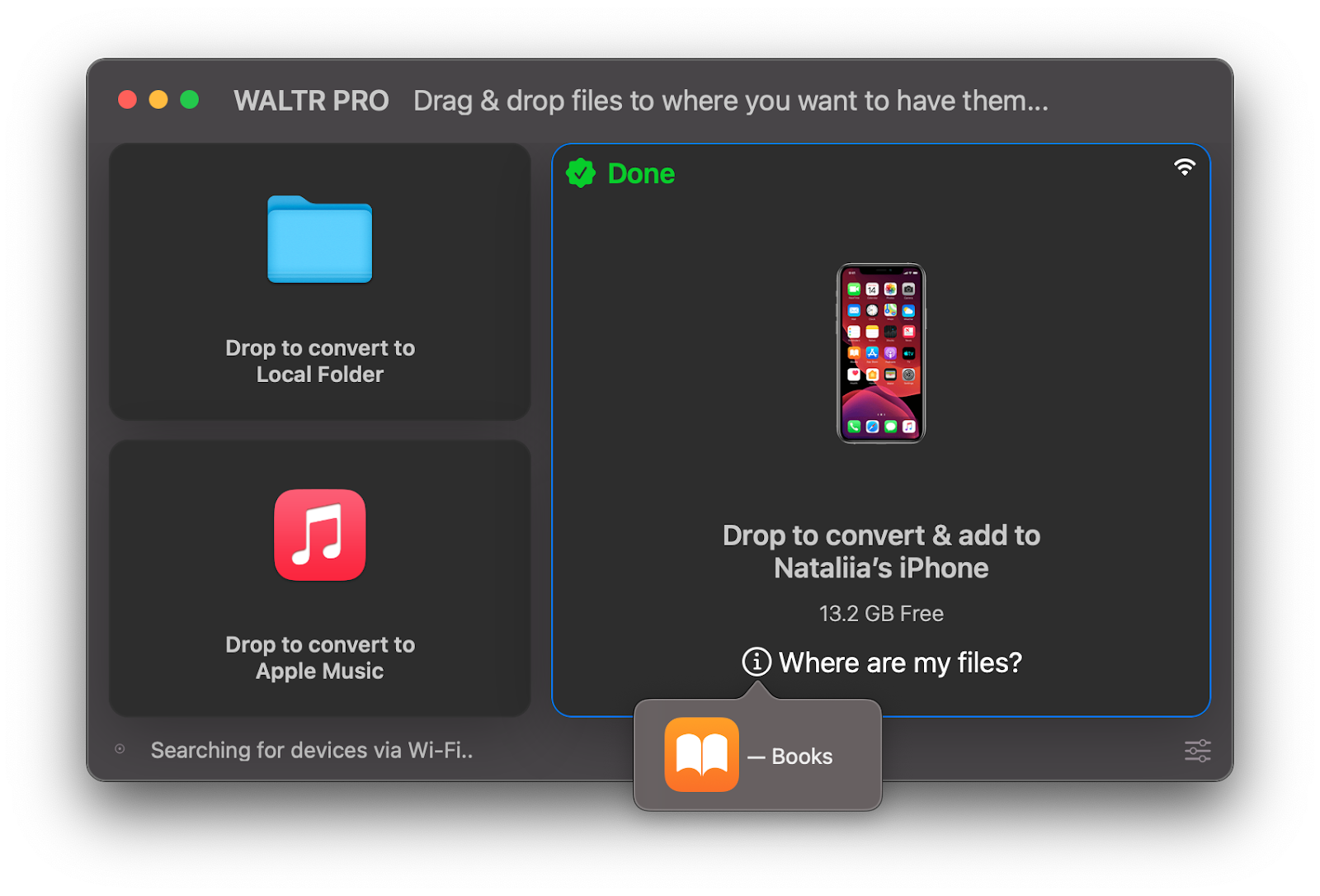 Does WALTR PRO support export from iPhone or iPad to Computer?

No, WALTR PRO doesn't support such an option. It is dedicated to transferring files from Mac/PC to Apple mobile devices only.

Do I need to uninstall WALTR 2 before I download WALTR PRO?

No. WALTR 2 and WALTR PRO are separate products. You are able to download and use both of the apps on your machine.

I need to remove duplicates from my iPhone. Can I do this with WALTR PRO?

Unfortunately, no. WALTR PRO supports transferring files from a computer to an iOS device but does not manage them on your device.

How to uninstall WALTR PRO?

If you want to uninstall WALTR PRO on a Mac computer, do the following:

If you want to uninstall WALTR PRO on a Windows computer:

Is WALTR PRO safe to use?

Yes. All communications between your web browser and Softorino, as well as between our products and our servers, are secured by SSL encryption. You can also read more about our privacy policy and safety here.

How do I get a refund?

Our primary commitment is to make WALTR PRO do what you expect of it. We want to easily sort out any kind of issue and make you happier in the process. If you still would like to get a refund*, please specify a few moments while requesting it:

Your answers will help us improve and make WALTR PRO even better.

*Refund requests must be placed within 30 days after the purchase via a support ticket.

**Please mention the Order ID you received in your purchase confirmation email from FastSpring.

I'm a Windows user. Do I need to install iTunes in order to use WALTR PRO?

No. You don’t need to have iTunes installed on your PC. You may choose one of these ways to make WALTR PRO work properly on Windows PCs:

Any Windows app that has to access your iPhone (notwithstanding the model) needs to use Apple Mobile Support drivers. They are usually installed on your computer together with iTunes. Naturally, WALTR PRO for Windows has to use these iTunes drivers as well.

Do I need to have a jailbroken device?

No. You don’t need to have a jailbroken device as WALTR PRO operates the same way as iTunes made by Apple, so it does everything in a legit way.

Do you have a user manual?

Yes, we have designed a detailed guide for WALTR PRO. You can download it here.

Why is WALTR PRO better than WALTR 2?

WALTR PRO still has WALTR 2's simple drag & drop feature that lets you get around file format issues and transfer any music, video, ringtone, or book file straight to iPhone or iPad. But WALTR PRO contains new advanced features and a standalone converter. It also gives you more control over file management. WALTR PRO allows you to:

Users of previous versions of WALTR 2 can upgrade to WALTR PRO at 50% off.