How to Put Music on iPod Classic, Nano, Shuffle without iTunes

How to put music on iPod without iTunes is a popular question even in 2020. So dust off your legacy device - here’s how to put songs on iPod Classic in a snap!

Neither is the need to add music to iPod without iTunes.

This legendary device is always in fashion: in 2001 or 18 years later.

Even though it seems like everyone (including Apple) is giving up on this iconic device, it should not be forgotten. There are tons of people who still have all those ‘old school’ devices laying around.

Challenge from Softorino: Dust off your iPod – it can be useful even in 2020!! With one slick app, it’s just a breeze to put music on iPod of any model and generation! In this in-depth article, you will learn how to sync iPod without iTunes on Windows and Mac.

How to Put Music on iPod without iTunes

It’s been 18 years since the release of the original iPod. The workaround we’re going to show you here is truly exclusive. There aren’t many other solutions that help you put music on iPod Nano for example or any other retro gadgets like iPod Classic.

Sure, iTunes is also an option. But it often lags when you try to transfer anything onto devices of the past generation. There is a reason why so many people are searching for a solution to transfer music to iPod without iTunes. It’s a struggle.

How does this work? Watch the video for a suuuuper quick preview:

Make sure to follow the instructions below on how to put music on iPod Classic without iTunes step by step.

To add songs to iPod, you have to begin by downloading WALTR 2. Get the installation file here:

It works for both: Mac and Windows. The best part is that WALTR 2 will help you sync iPod without iTunes.

Step 2. Plug your iPod into your computer

For the first-second iPod gens use FireWire cable + USB adapter. For later versions (released after 2004) use the standard USB lighting cable. 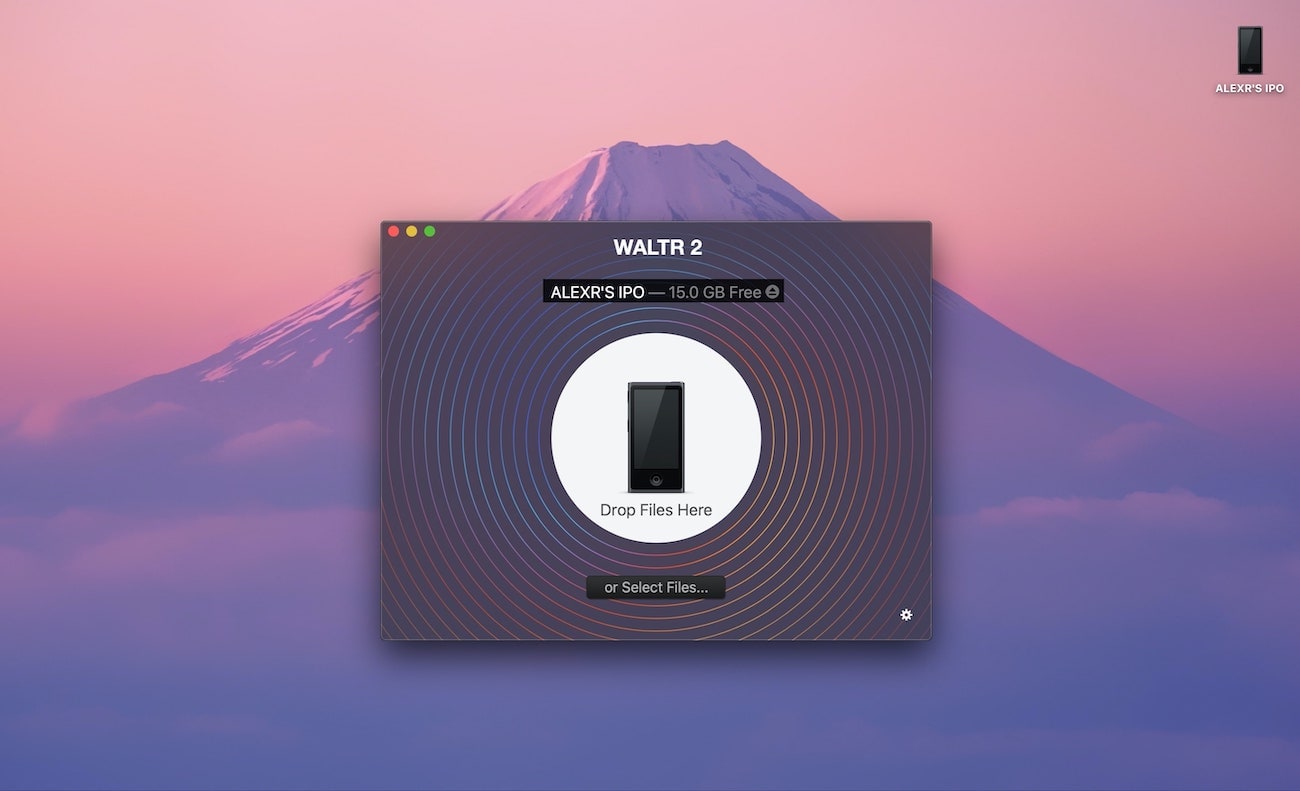 First off, make sure to plug your iPod into your computer.

FYI, there’s an option to put songs on iPod wirelessly, but since not all iPod models have Wi-Fi support, you’ll need to use cords.

Once you plugged in your iPod – the application will be synchronized with the device on the spot.

And here’s the nice part: you can push literally ANY music format into WALTR 2: MP3, M4A, FLAC, AIFF, APE – does not matter. Btw, here's how to play FLAC on iPhone natively!

So, when you dropped your file into the application, you will see a progress bar. When it’s filled up – your song is on your iPod. The app will convert it on-the-fly & push it to your device.

To transfer music to iPod, all you need to do is drag your music files into the drop zone. The app takes care of the rest and does it lightning-fast. That’s just how ridiculously easy it is to put music on iPod using WALTR 2. 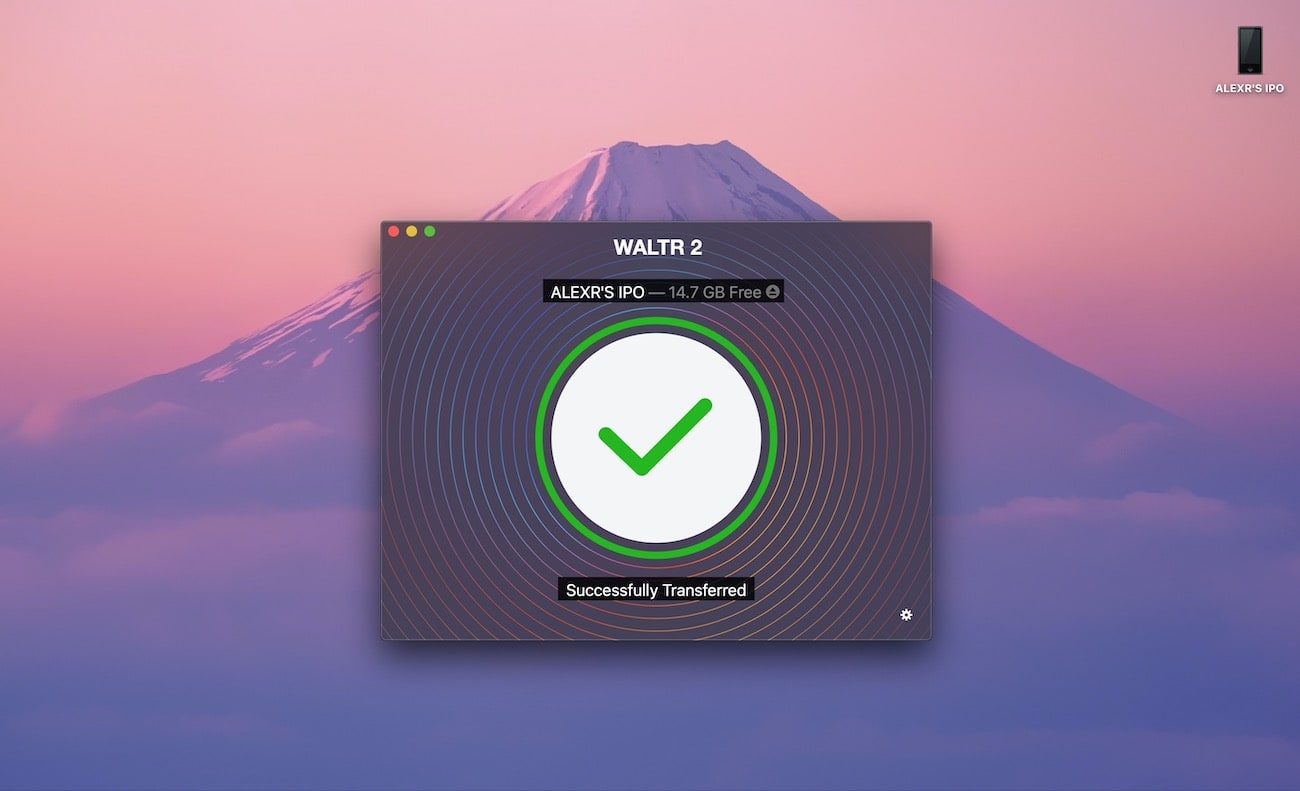 Done! Once you were able to copy music to iPod just locate your songs inside the default Music.app

One more thing: you don’t have to put music on iPod manually song by song. Just push the whole folder into the application. WALTR 2 will transfer it to your iPod immediately.

WALTR 2 supports ALL iPods ever created. Same quickly and easily WALTR sends any music & video files to iPhone or iPad. The only difference – it can be done wirelessly (if your device and computer are connected to the same network).

I’ll make a wild guess and say that you probably spend lots of time on YouTube. Even if you don’t, we can still agree on the fact that it’s an endless supply of most diverse content: video blogs, podcasts, talk shows, songs, covers, concerts, documentaries and so much more.

It’s actually remarkably easy. You can read out detailed dive into how to download music from YouTube to iPod directly or continue reading to get the summarized version of it.

Here’s how this works: 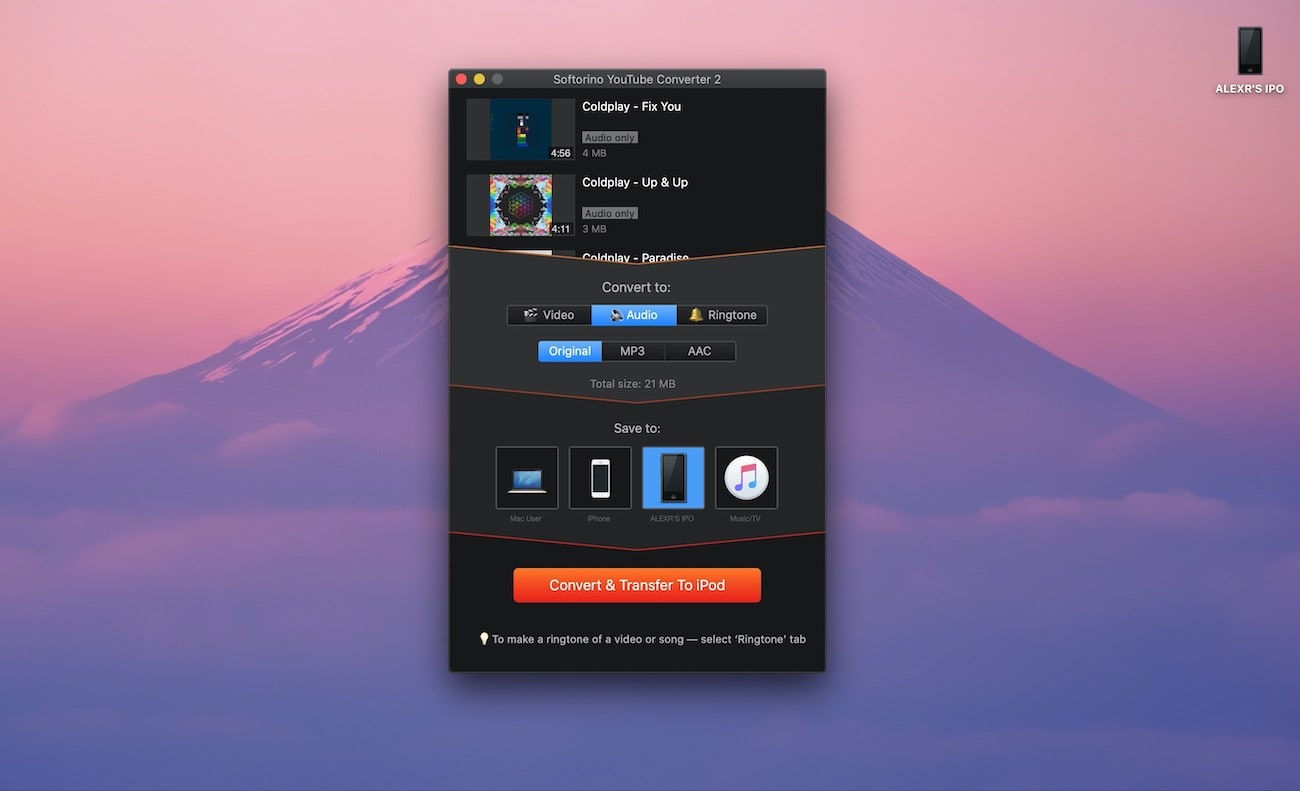 Connect your iPod to your computer and copy the URL of the desired track. Congrats. You are half-way done through the steps required to add music to iPod.

Interesting fact: Softorino YouTube Converter supports every single generation of iPod and iPhone. It can be downloaded for free for 24 hours, after which, in case you enjoy using it, you can purchase the full license for only $19.95.

Besides iPods, Softorino YouTube Converter will download any video or audio to your desktop machine or iPhone. This is the supreme way to start using your old iPod. Cult Of Mac confirms that SYC 2 seamlessly converts videos to Apple devices.

Now that you can add songs to iPod without iTunes and, thus, without the struggle, continue your journey of building the best music library one can think of. The sky is your limit. Well… and memory.

Reasons why you should be using iPod in 2020

Starting from 2001 Apple released 7 generations of iPod Classic. And if you are wondering if you can use your old iPod, the answer is definite yes! Taking into account all their different and common features, we tried to come up with at least 3 reasons why you should dust off your old iPod and bring it to life again.

Reason 1: You can easily keep your iPod live and updated with WALTR 2.

We just showed you the workaround how to put music on iPod Classic without iTunes in a matter of seconds. This is how you can add thousands of songs on your iPod Classic almost effortlessly. And actually use your old iPod. Even in 2020.

Even the very first iPod had quite a solid storage size. Debuted in 2001, there were 2 models: 5GB and 10GB. Taking into account, that there’s only music there, it’s more than enough, isn’t?

And the final 7th generation of iPod Classic has the second largest storage capacity of all the Apple mobile devices – 160 GB (40 000 songs approximately!).

Gigantic music subscription platforms like Apple Music, YouTube Music or Spotify may offer millions of songs, but 160 GB of storage just for music is more than anyone will ever need. And yet it doesn’t have any monthly fee or data charges.

So go ahead and put as much music on your iPod as it can hold! 😉

The battery life expectancy of iPod Classic ranges from model to model, clocking up even to 36 hours of active using at its best.

This is more than sufficient to music lovers’ needs.

And you’ll agree with me that Battery life is truly an important feature.

***To make it clearer, here we prepared a brief table displaying Tech Specs of all iPod Classic models. We included data about storage size, battery life expectancy (in hours of active music playback) and connectivity. 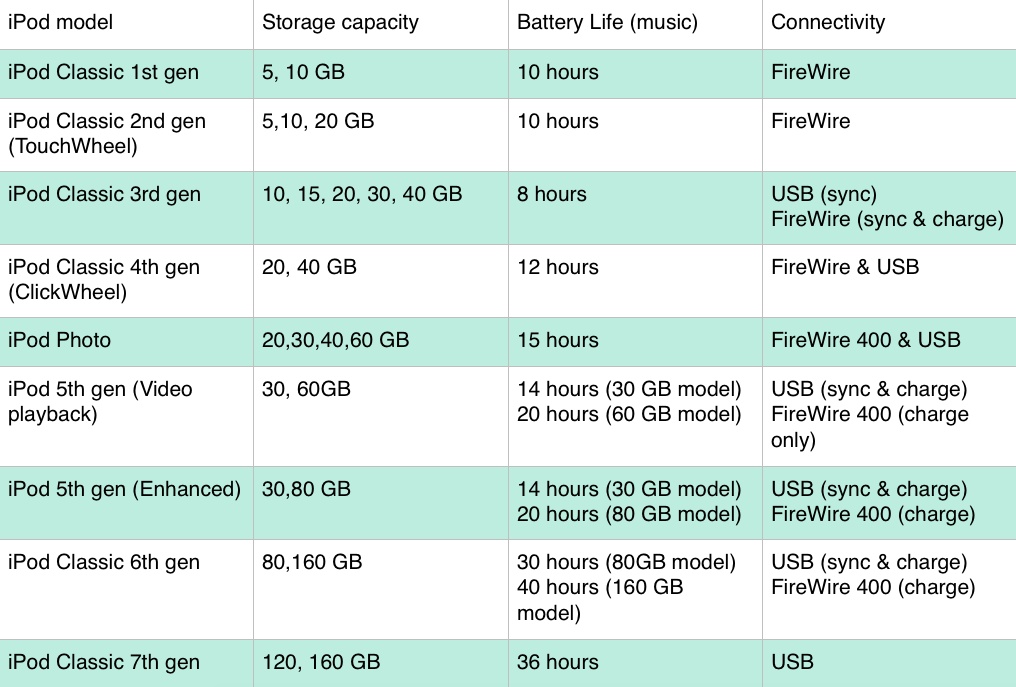 Reason 4. Sound Quality is better than in an iPod Touch & iPod Nano

Please know – it’s my personal opinion. But the majority of audiophiles and music experts out there will agree with me: iPod classic (based on the model) has superior audio quality than Pod touch or iPod Nano. One of the reasons is that it was designed with Wolfson music chips built-in.

Whereas the iPhone and iPod touch is equipped with Cirrus Audio chip.

Experts also point out iPod Classic 5,5 gen for having the best sound quality ever. By the way, speaking about sound quality: no iPod will natively support FLAC (free/ fully lossless audio) unless you use WALTR to put music on iPod.

Reason 5. This Nostalgic feeling you get when holding an iPod Classic

Even now Apple aficionados will gladly spend the fortune to get some rare edition of iPod Classic. And it’s a no surprise since iPod was a revolutionary product – a true milestone in the history of Apple Inc.

For many people, it still symbolises the whole era and brings back those sweet memories connected with the older days.

And – it’s a great product. And now you know how to put music on iPod shuffle without iTunes.

When the question of how to add music to iPod without iTunes is no longer a hard one to answer, an iPod can easily return into your life.

Back in 2001, the iPod was a game-changer, the tool that transformed the way you listen to music once and for all. Take your iPod wherever you go – and listen to your fave songs anywhere: on the road, in the park, in the subway.

It’s got huge storage size, great sound quality, good battery life and most importantly – there’s the way to add music from computer to iPod Classic. Despite the fact that Apple discontinued the iPod and officially ‘abandoned’ it, there is the workaround to keep it live and updated anytime you feel like it.

With the new WALTR 2, the ability to transfer music from computer to iPod, you can easily put music on old iPod Classic, Nano, Shuffle, Mini without iTunes sync.

So the choice is yours, Neo: use or not to use?

P.S. Once you’ve learned how to transfer music from computer to iPod without iTunes, has it affected how often you use iPod now? Let us know in the comments below.

Download
Previous article ePub on iPad - How to read ePub files on iPad in iBooks
Next article How to Put Music on iPod Shuffle, Nano, Mini without iTunes