How To Convert WMV to MP4 on Windows & Mac Quickly & Easily 🚀

Most seasoned Apple users already know that the “premium” feel of Apple products means you have to say goodbye to certain freedoms.

Among them, the freedom to download whatever you want on your Apple device and have it play seamlessly, which seems to be something of an alien concept to the folks at Apple!

Today, we'll talk about converting Windows Media Videos to MP4 and saving them on your computer. Ready to go? Let's get to some practice 💪🏻

Why download video files in MP4 for Apple devices

Although some people say that you can plug your iPhone or other Apple devices into iTunes and download whatever you want, it’s not that simple. Apple operates in a way that makes a lot of things "exclusive", even the formats it supports!

You can’t download just anything onto one of these devices—it has to be supported by Apple. Most of the time, you can’t even download the associated software to open the files—they have to be in an Apple-supported format.

Nevertheless, you can download them in another way. If you do this on your own without any guidance and try to download videos onto your iDevice, you might end up running into a prevalent issue—the file may not be supported.

This is because most video files on the internet are in the Windows Media File (WMF) or Windows Media Video (WMV) formats. WMV is one of the most commonly used video file formats, but that doesn’t mean your iPhone will like it. They generally do better on devices developed by Windows. Apple devices tend to prefer videos in the MP4 format.

What is MP4 and why do Apple devices prefer it

The MP4 video format (or MPEG-4 Part 14) was created by the Moving Picture Experts Group (MPEG), an alliance of experts who work together to enhance the way media works worldwide. Not only is MP4 the most well-known and commonly used digital multimedia container format, but it also plays perfectly on Apple devices. 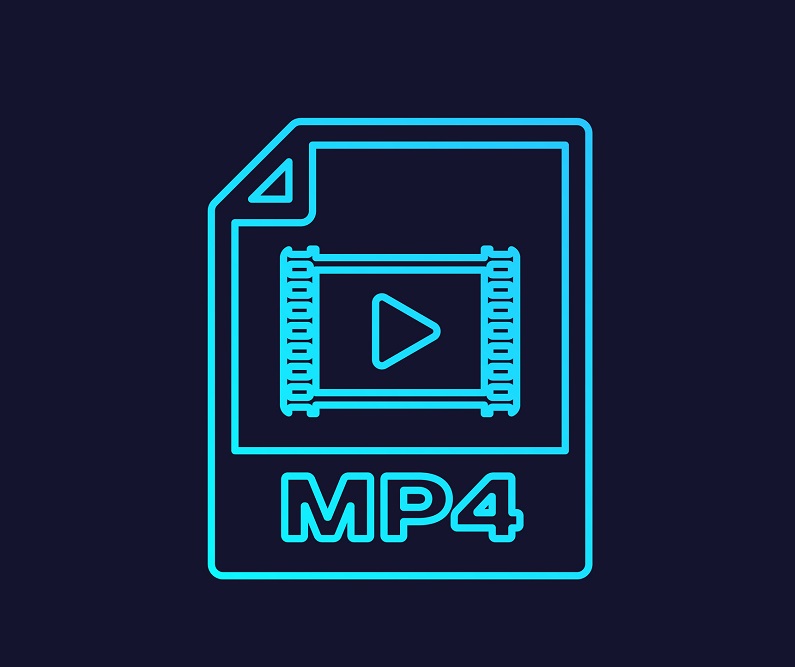 If you enjoy watching videos or movies on your Apple device, you need to be able to convert all your video files from WMV to the MP4 video format. If this is giving you nightmare flashbacks to working with MS-DOS commands, don’t worry, it’s not that difficult, as long as you’re using the right WMV to MP4 converter.

Can you convert WMV files from within the Windows Media Player?

The first time you have to convert a WMV to an MP4 or an MP4 AVI file, you’d be forgiven for thinking the Windows Media Player probably has an option somewhere in the advanced settings that let you can convert different video file formats. But it doesn’t, so you can’t. The Windows Media Player gives you no such option, leaving the door wide open for an enterprising third-party converter.

Now, if you’re asking, “So how do I convert a WMV to MP4?” don’t worry, we’ll soon be going over the quickest and easiest way to do it and thereby avoid the insanely long methods that most online tools make you go through.

How to convert WMV to MP4 easily and quickly

The software most people use with their Apple devices is iTunes, but it can’t convert files to other formats; instead, it either hides the files you’re trying to transfer or doesn’t transfer them at all. This is why you need to download a third-party software program like WALTR PRO to convert your videos.

WALTR PRO works a bit like iTunes but much better. It lets you transfer files straight onto your iDevice or computer and converts them into Apple-compatible formats during the transfer, so all you have to do is choose the files—the rest is automatic.

Download WALTR PRO from the official product page here. You'll get the app on your computer in a couple of seconds.

Launch WALTR PRO straight from the installation wizard or from the icon. Go through the license activation process or get a free 24-hour trial to test the app first. Follow the gif below to complete your activation:

If you want to transfer WMV files to your iPhone or iPad, connect one of them to your computer via a USB cord for the first time. Tap "Trust this device" so that WALTR PRO and your computer could memorize your device. After the first connection, you'll be able to transfer files wirelessly, through Wi-Fi!

[Make sure both your devices are connected to the same network]

Open up the folder containing the WMV videos you want to convert or move them to your desktop. Drag and drop your chosen files onto the destination tile. This can either be your computer's local folder or your iDevice. Let's just convert the files and save a new MP4 file on your Mac. 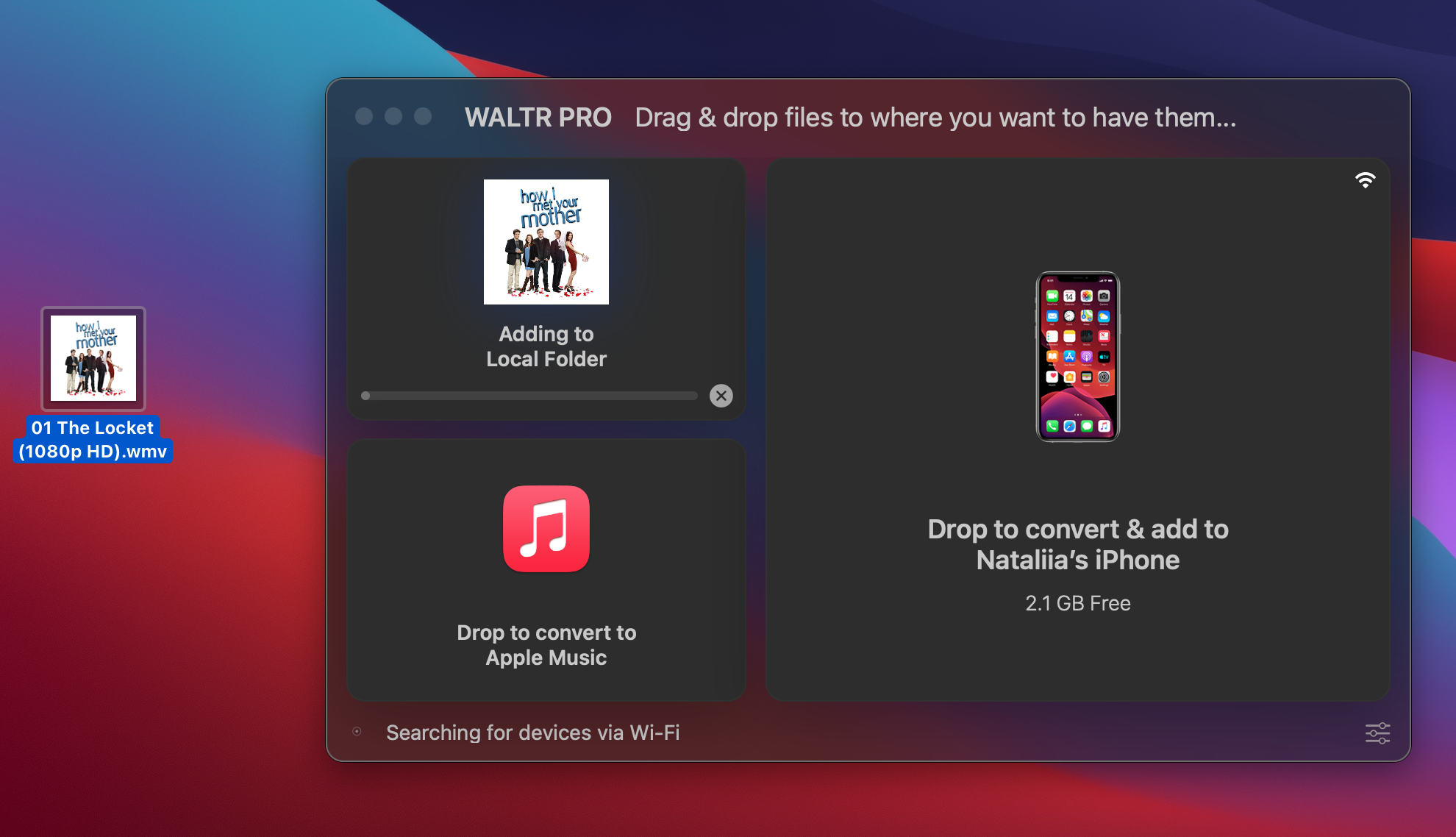 As WALTR PRO processes the files, it automatically converts them into MP4 (MPEG 4) format, so they’re ready to play as soon as you open them!

When you hear a short notification tone and see a green DONE icon, you know your files are ready.

Don't know where your file landed? Click on "Show in Finder" if you transferred it to your Local Folder or "Where are my files?" if you moved them to your iDevice. WALTR PRO will show you where they're at. 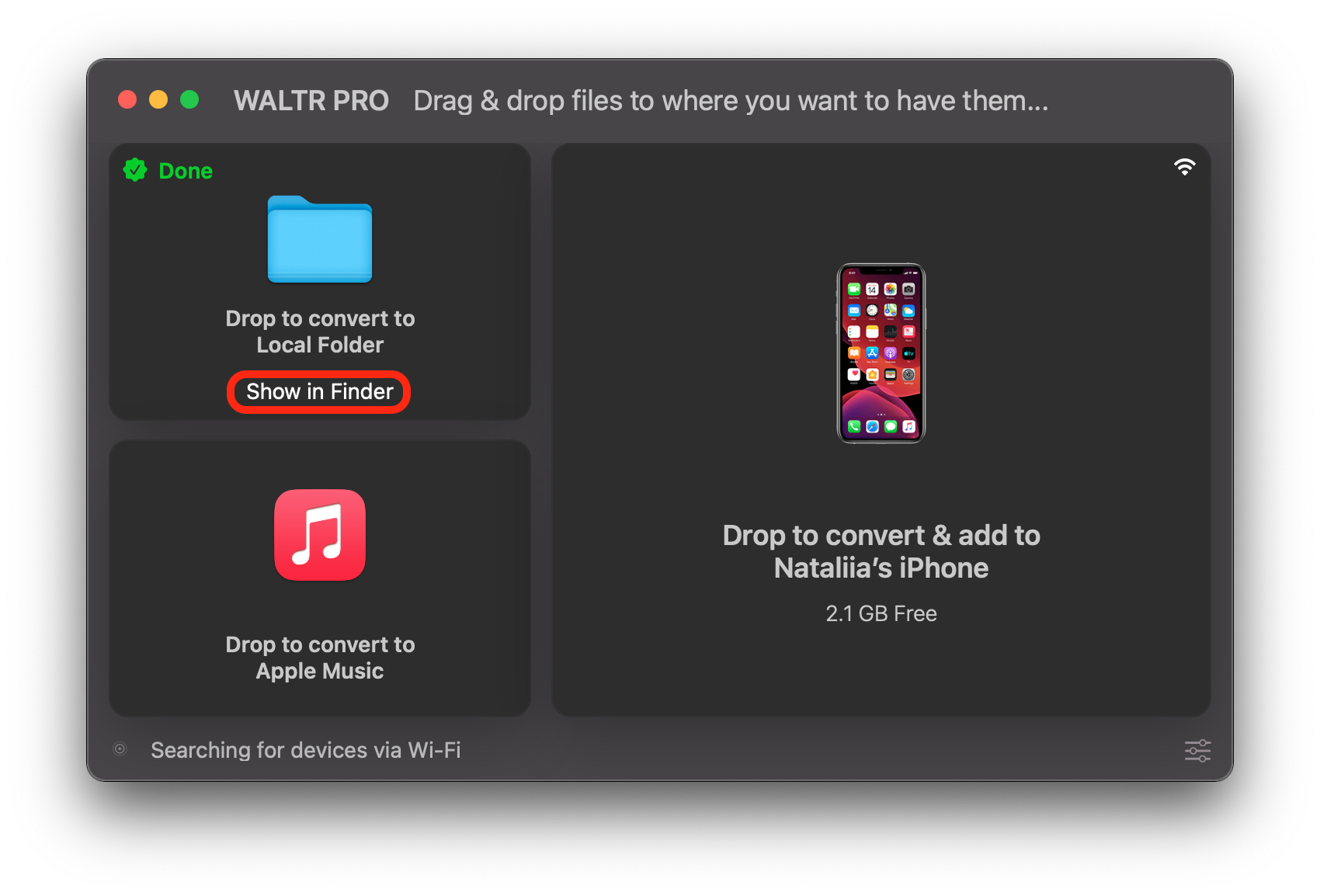 This is easily the best way to convert WMV files to MP4 because it’s much easier and quicker than other complicated, longwinded methods—especially new users!

✅ No compression — no loss of quality

This conversion method gives you essentially the same video you had on your phone because it doesn’t use any video compression. Even if you were converting a Blu-ray movie with this, it would retain the same audio and video quality that it had before the conversion!

🗂 The converted files are right where you need them

Finally, this software automatically adds files to the apps you would use them in: books go to iBooks and videos go to videos, or Apple TV ready to play. So you never have to spend time searching for your converted file, and you don’t need an associated program to open them, which is something hardly any other software does automatically, and certainly not for free! It does away with the hassle of doing every step yourself.

Even though Apple might make you think you can’t download certain audio and video files onto your phone, software like WALTR PRO makes it an effortless task. Anyone can do it regardless of their tech level (yup, that includes the noobs too). It opens you up to a whole world of content you might’ve thought you’d never have access to!