Apple introduced new image format – HEIC. But is it compatible with all devices yet? No. This guide will show you how to convert HEIC to JPG.

iOS 11 made our lives easier. Although there is one thing that isn’t that simple to work with. That’s HEIC image format. In this article we’ll explain how to convert HEIC to JPG format.

What is a HEIC file?

HEIC files became popular when Apple announced that iOS 11 and later will use this format. Actually, HEIC files are saved in so-called HEIF – High Efficiency Image Format. It is based on MPEG.

HEIF uses more sophisticated compression methods, so the size of an image is significantly smaller (MPEG says – half of the JPEG size). The images below were both compressed to 28KB. The .jpg image is on the left, while the .hevc picture is on the right. The difference is stunning!

Although HEIF reduces the size, it doesn’t reduce quality. It is just more advanced than JPEG. It is enough to say that JPEG was developed in 1992. For a long time, there was no need for a better format, but with more advanced cameras a new format had to be made. Otherwise, our photos would take too much space.

Another pro-HEIF fact is that it uses 16-bit color, compared to JPEG’s 8-bit. Along with everything that comes with JPEG, HEIC pictures can be edited in several ways, and those edits are saved as new layers on the original image so you can undo the edit whenever you want.

Although this format is the best option we have at this moment, it isn’t supported on all platforms. For example, if you transfer photos from iPhone to PC and if those photos have the .heic extension, you cannot open them with default Photos app. You’ll need third-party software to open those files or to convert them to JPEG.

If you are on Windows 10, Photos can be set up to open these files, with additional download and installation of the codecs.

How to Convert HEIC to JPG in a Snap!

WALTR HEIC Converter is a program that enables you to convert HEIC images into JPG or PNG. It is developed by Softorino (which is known for WALTR 2) and represents one of the best HEIC converters both for Windows and Mac. It is completely free to download and use.

Double-click on the program icon will cause the app to start. If you have ever used WALTR 2 (and you should if you haven’t), the interface looks very familiar. 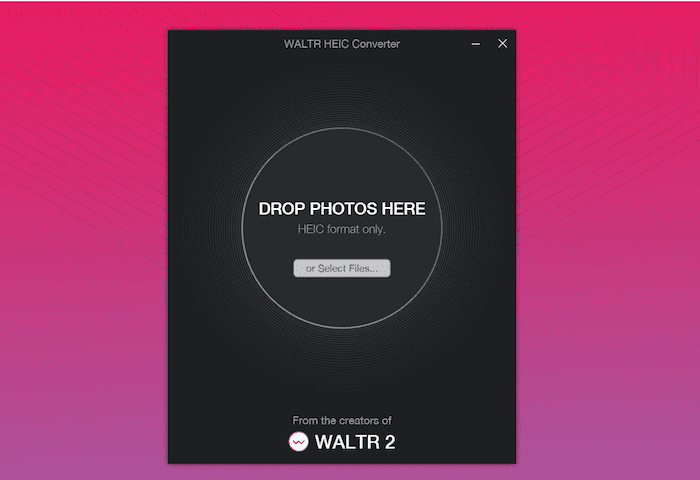 Navigate to the file with the .heic extension that you want to convert and drag it into the program window. You can add multiple photos, but all of them have to be in HEIF format. 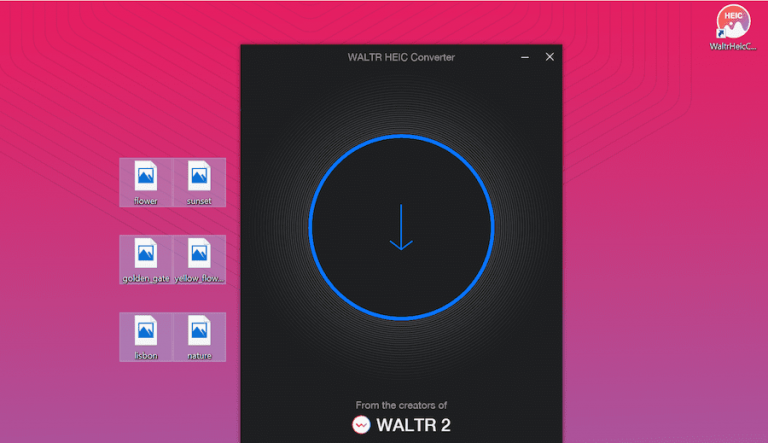 At the top of the program window, you’ll see a menu where you can select JPEG or PNG. Click on the JPEG option. In this case, all of the photos you added will be converted to JPEG files. 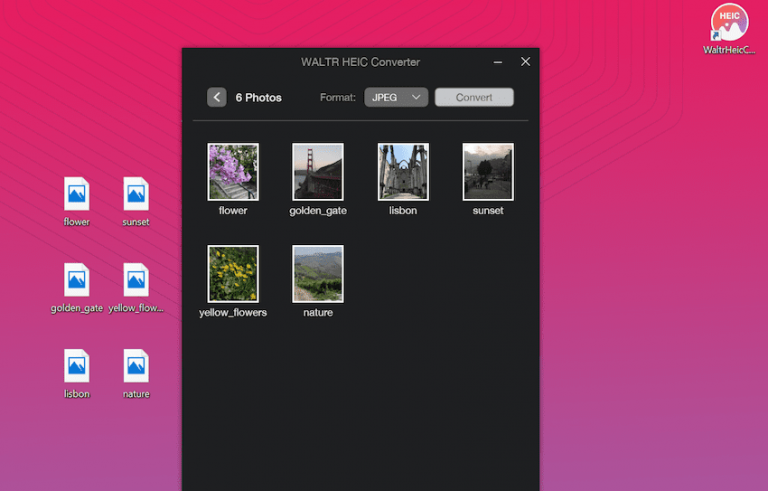 Once the output format is chosen, click ‘Convert’. A new window pops up, asking you to browse for output folder – the folder where you want to save the JPG photo. Select the one you want and click ‘OK’.

After a few seconds, your photos are converted, and you can find them at the location you have chosen. 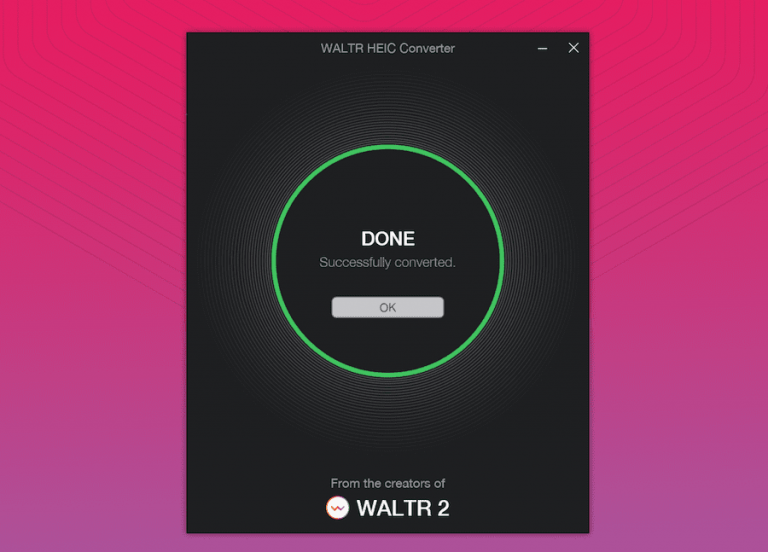 The thing that makes WALTR HEIC Converter the best HEIC converter online is the fact that it also supports PNG, along with the JPG, and that is still a lightweight program that is simple and easy to use. That being said, here is a quick guide on how to convert .heic to .png.

How to Convert HEIC to PNG using WALTR HEIC Converter

PNG is definitely the most popular lossless format for compression on the Web. It was developed in 1996, and it was intended to be the replacement for GIFs.

WALTR Heic Converter can be used to convert HEIC photos taken with your iPhone to PNG.The process of conversion is pretty much the same as it was in the case of converting to JPEG. 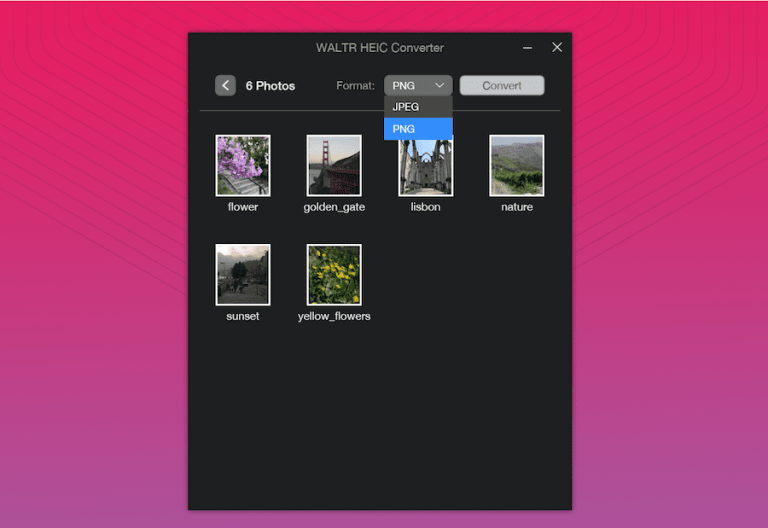 You just have to drag and drop the .heic file into the program window and select ‘PNG’ as an output format. Now just select the saving folder, and that’s it. You’ll get the ‘Done!’ message from the program once it has finished with the conversion.

Now that you have seen how WALTR Heic Converter is easy to use go and free download it and enjoy in your photos in the format you want.

We already mentioned some of the advantages of HEIF over JPEG. Now we will take a closer look at all the differences between these formats.

JPEG was the most common lossy compression method for years. This format has an adjustable compression degree, so that image quality and size ratio is the best possible. Usually, this ratio is 10:1.

It was initially released 26 years ago. The fact that is used for such a long time speaks for itself. It is used for storing and transferring images on the Internet, and it has been used in iOS for a long time.

HEIF, on the other hand, is a modern approach to image storing. It was released in 2015, and it started to take over the market slowly. It gained much popularity when Apple announced that iOS would start using it since iOS 11.

Although it is used in iOS devices, HEIF is not Apple technology, since it was developed by MPEG (Moving Picture Experts Group). Besides Apple devices, HEIF format is supported by Android too.

The most significant advantage that HEIF has over JPEG is that it can store twice as much of information in an image that is the same size as JPEG image and keep the quality at the same time. That sounds like a revolutionary discovery.

Main features of HEIF are storing of image derivations, image sequences (like burst photos and live photos) and image metadata along with the picture itself. The ability to store multiple images in one HEIF file reduces the memory usage drastically.

If you use an iPhone 7 or later (along with the iOS 11 or later), the photos you take will be saved in HEIF format unless you change this in Settings. As we saw above, HEIF format is much more sophisticated than JPEG, so it should be your choice for storing images on iPhone.

In case you transferred HEIC files to your PC, and you now cannot open them, a reasonable thing to do is to convert them to JPEG. We will now take a look at a piece of software that is able to do that in a few seconds.