Even if you are a picky, choosy, hard-to-please kind of a person – you will easily find an iPhone music player you will fall for!

The best part? You will also learn how to put any music files on your Apple device. Read on!

How to Quickly Add Music to iPhone? 🤔

Before we proceed to music players – let me show you how to easily/quickly/seamlessly import any music into iPhone without using iTunes.

You can push any music to iPhone using class MacOS & Windows software WALTR 2. Basically, all you need is to connect your iPhone (via USB or Wi-Fi) and drag any music/video into the drop zone. Immediately all content will appear on your device. 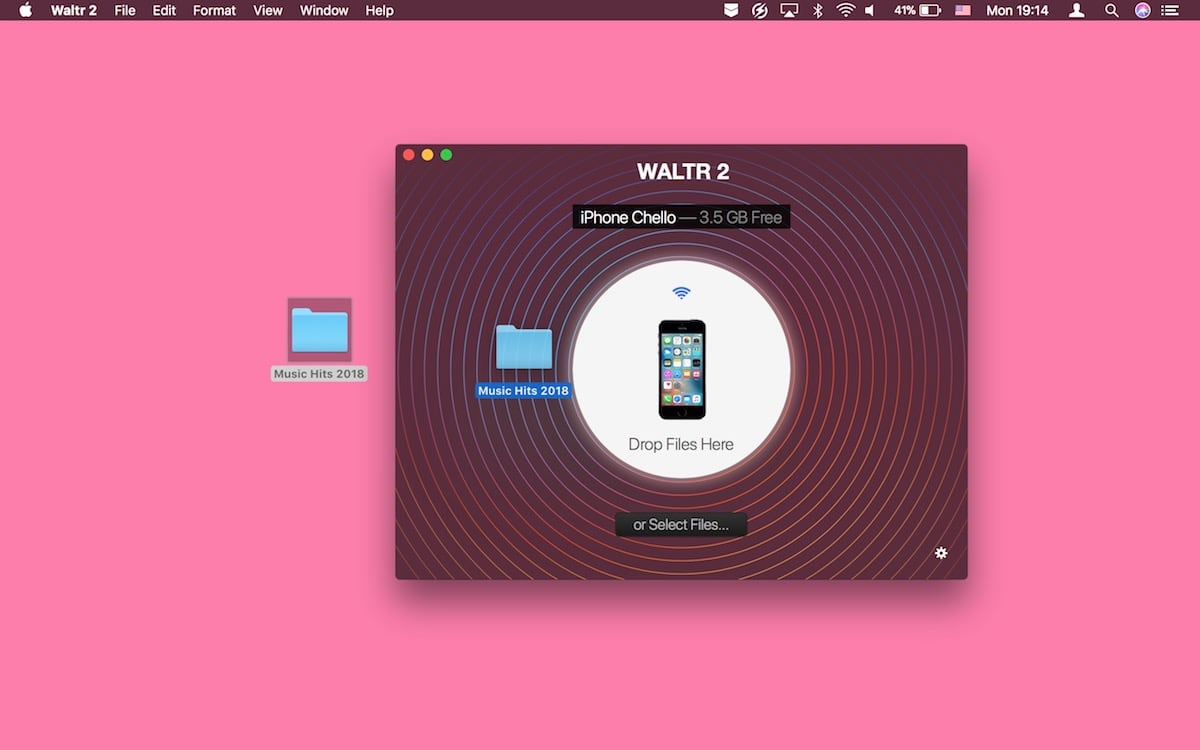 With WALTR you can just drag any media onto your iPhone

You can download the app by clicking on the ‘Download’ button below. Alright, now you know how to get music on iPhone – let’s talk about the best iPhone music players to play it back! 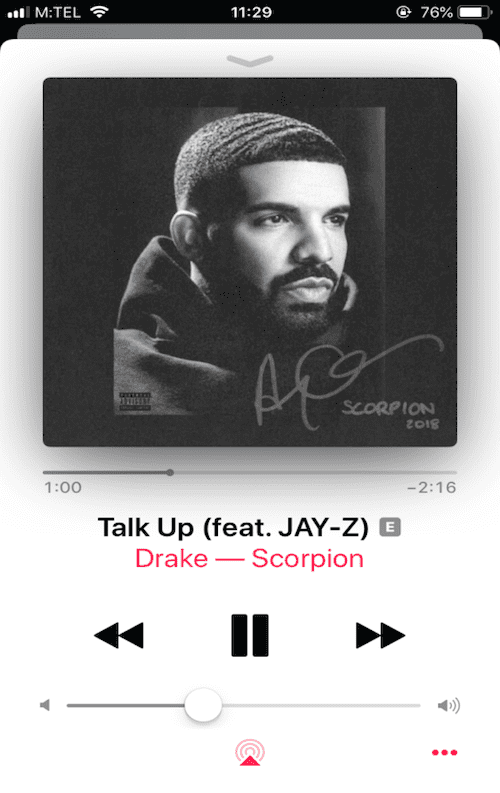 Default iPhone music player is free, beautifully designed and simple. You can add as much music as you want and create a local library that can be played offline or you can download whatever song or album you want and add them to your personal playlist.

Maybe the most important thing to us when we listen to music is that we’re not interrupted by some advertisement of a company that wants to sell us something.

Well, guess what, the Music app is totally ad-free. I personally don’t know of any app that’s free and offers this feature.

Battery consumption can often be a problem for some iPhone users. In that case, the stock Music app can help you prolong your battery life, since it is really power-efficient, which is one more reason why Music app is probably the best offline music player for iPhone.

What formats are supported?

Since iOS is popular for its limited support for some formats, the thing that may appear as a problem here is how the stock music app will react to a different format of audio files that you might want to transfer and will those non-MP3 files be playable on the stock Music app.

This is when WALTR 2 steps onto the scene. With this amazing piece of software, you’ll be able to transfer any song, in almost every known format, to your iPhone and play it with the stock Music app.

If you’re using WALTR 2 you don’t have to download any third-party FLAC player to play this audio file. You can simply add it to your iPhone without any worries and play it with the default Music app.

WALTR 2 is known for its simplicity and easiness of use. The only thing you need to do in order to transfer the song to iPhone is to drag and drop the audio file. WALTR 2 makes sure that this file can be played with the Music app. You don’t see what’s going on under the hood. 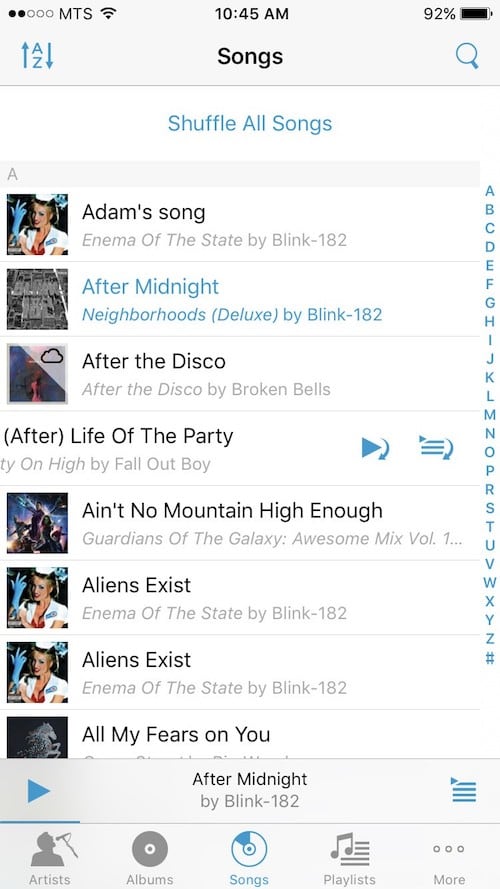 Cesium is among the most popular players because of its minimalistic interface and price.

If you’ve ever looked for any iPhone music player, you’ve certainly heard about Cesium. It’s arguably the best option if you don’t want the stock Music app.

What’s great about Cesium is that it automatically recognizes your iCloud library and Music library, so you can play those songs with Cesium.

Its minimalistic and simple user interface and magnificent functionality are among the things that make this player so great. 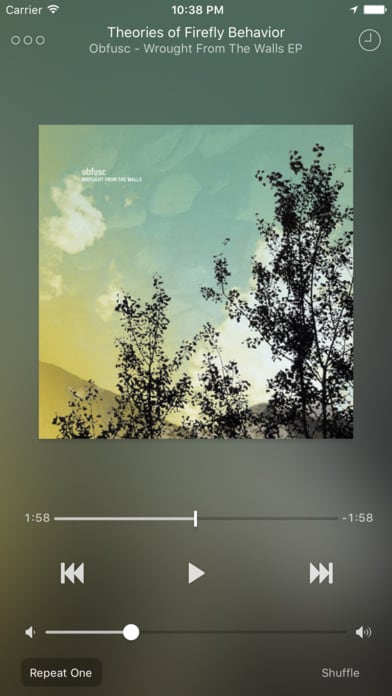 Compared to the stock Music app, Ecoute has a slightly better-looking user interface, with options to automatically go to night mode when the brightness is lower. It also has Facebook and Twitter sharing options.

It’s a cool music player but it’s not free. The price is $1. 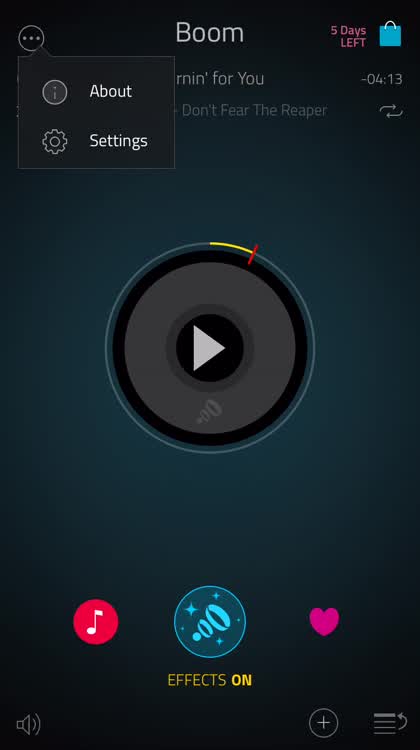 Boom is a music player and arguably the best iPhone music player with equalizer. Visually, it may be the best-looking app on this list.

Besides its good look, it has some cool features like bass boosting your songs and adding other equalization effects.

Multiple libraries and customizing your playlists according to your current mood are among the main features of Boom.

This app can be downloaded from the App Store for free. 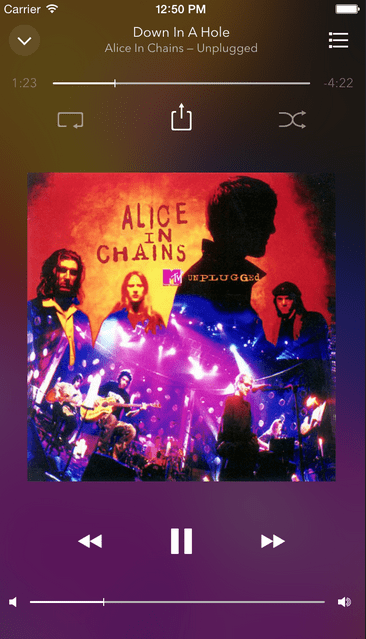 As the name suggests, TapTunes is an app that shows you artworks of all of your songs in random order and lets you tap on the one you want.

The main feature of this iPhone music player is that you don’t have to scroll through the names of the songs but through the artworks of them.

This might sound as an advantage over the other music apps, but there is a large group of iPhone users that find this annoying. 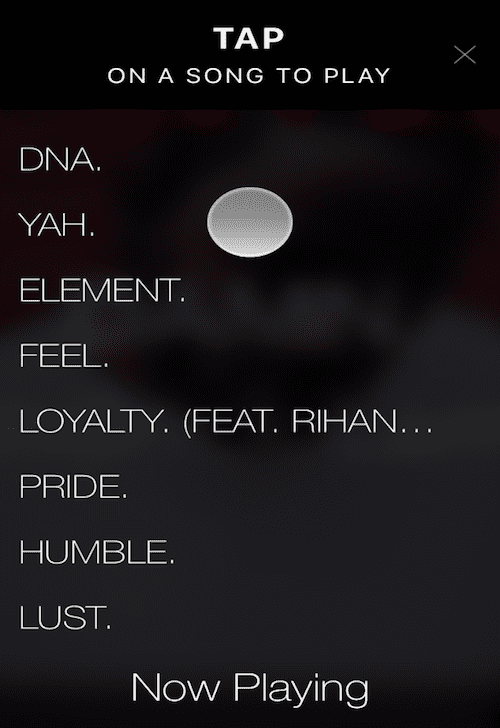 Listen: The Gesture Music Player is an app that has no buttons but runs using gestures instead. That provides easier navigation and control of the interface.

This app offers online radio also. It is one of the best free music players on iOS, besides the stock Music app.

Another great iOS music player that will cost you $2.99. Along with the music, it can also play videos.

It allows you to customize album artwork, which is something that no other app here supports. You can use it to listen to your music on iPad also. 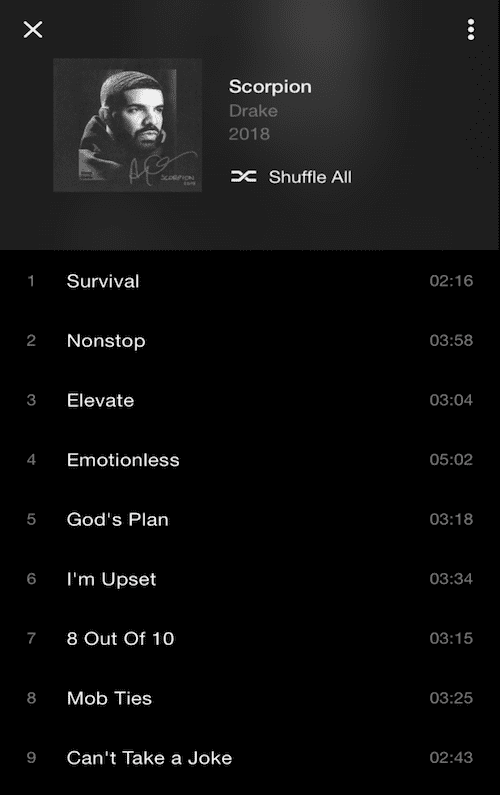 VOX Music Player is one of the top free music players on the market.

The main feature of this app is the possibility to listen to music from different sources, like SoundCloud and Spotify.

This iPhone music player supports FLAC and WMV formats, along with the MP3, WMA etc. 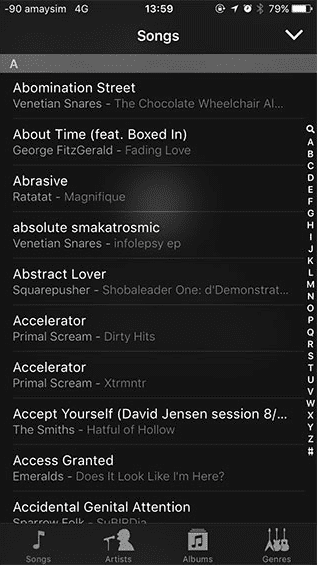 The first music social network – share music with friends, send messages or listen to others’ playlists.

SoundShare is a social network for music. You can see what are your friends listening to and play that song, you can send and receive messages and create playlists with your friends.

It is the first app of this type and it’s expected to make a huge success. 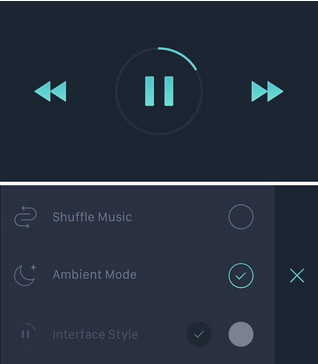 If you’re looking for a minimal and simple user interface, then ARIIA is the app you should definitely try out.

The main feature of this iPhone music player is its gesture control mechanism that allows you easily and quickly volume up, down or change a song.

While it has many advantages over some bigger apps (ARIIA takes only 1.8MB), it cannot play playlists, so you should think twice before you download it. 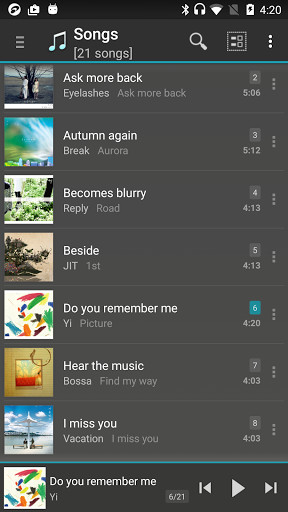 jetAudio is an iPhone music player with an equalizer. It is free to download and use.

Some of its cool features are customizing songs with sound effects and setting a sleep timer, so it shuts down automatically after some time.

Why users love jetAudio? Well, it features crossfade with Auto and manual skip. Also, with the help of Bluetooth, you can automatically launch jetAudio instead of the default iPhone music player. 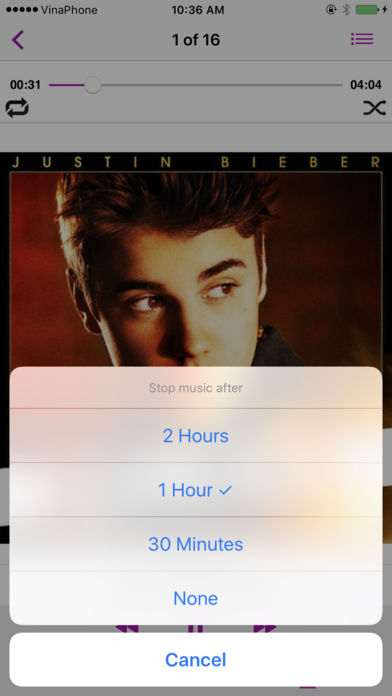 Play FLAC and WMA on your iPhone with no hassle!

FLAC Player+ solves the problem of FLAC format support that lacks stock Music app. Along with FLAC, it also supports lossy formats like MP3 and WMA. 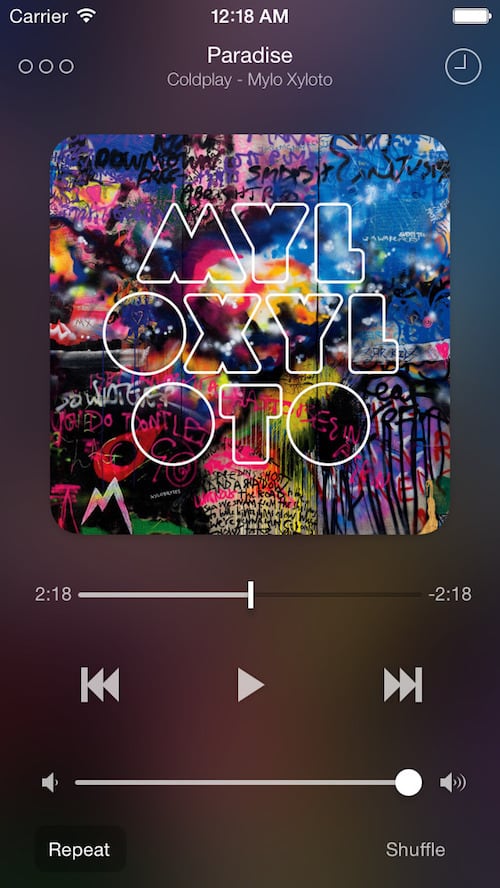 This is an outstanding iPhone music player with a great graphical interface that enables you online search for your favorite songs. Clean and modern design make Pandora one of the top in the Music section of App Store.

It has a 4.8 rating on the App Store, so that speaks for itself. It is free to download, but for the best experience, you should try Plus (ad-free) or Premium version. 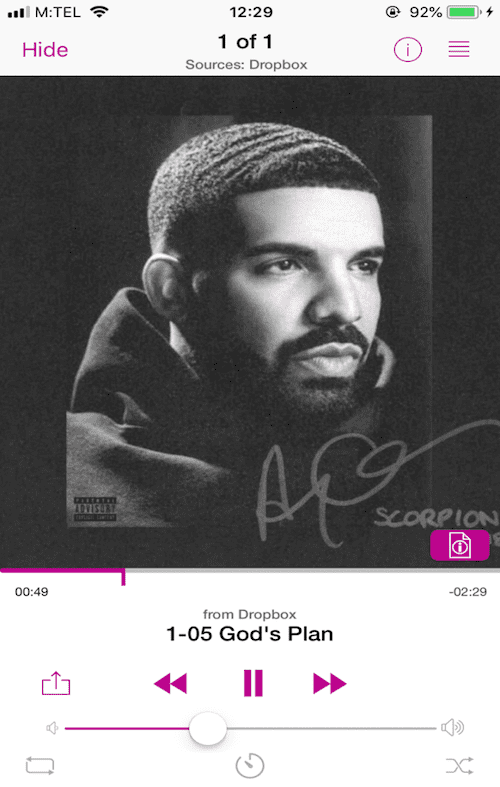 Similar to the last one, this iPhone music player enables you to download your songs that you can play while you’re offline.

It can access your cloud music storage without the Internet, so it’s great for saving memory space. 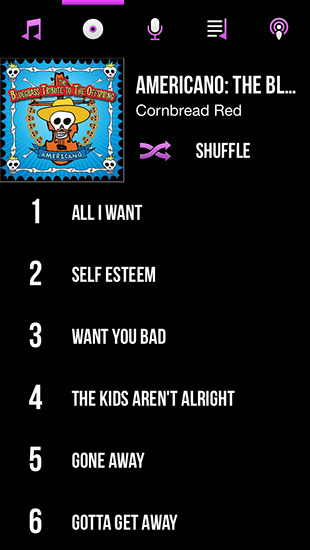 With CarTunes, you can share music with friends and control the volume with gestures.

This iPhone music player is not free but it definitely isn’t a waste of money.

It’s another gesture-driven app that is easy to use. With CarTunes you can easily share your music experience on social media. 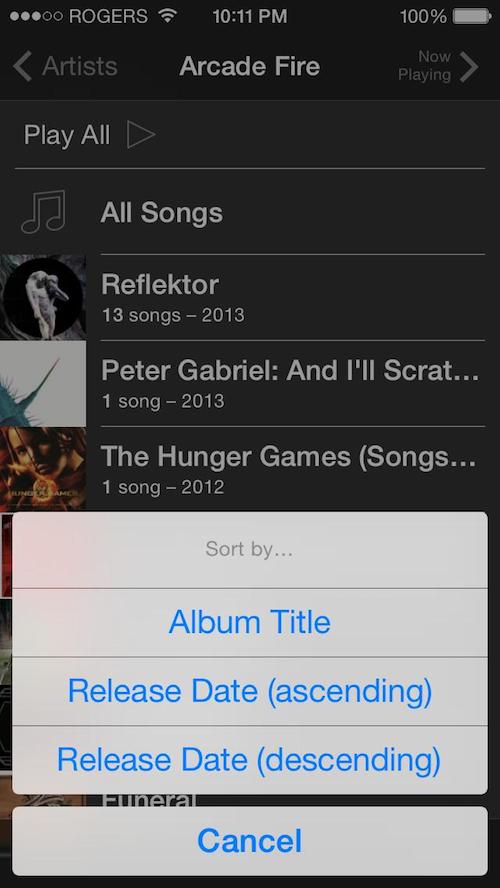 Picky Player is a choice worth considering if you’re looking for a fast and reliable iPhone music player.

It has an astonishing graphical interface and many options for creating playlists. It can sort your music in various different ways: by title, release date, artist etc. 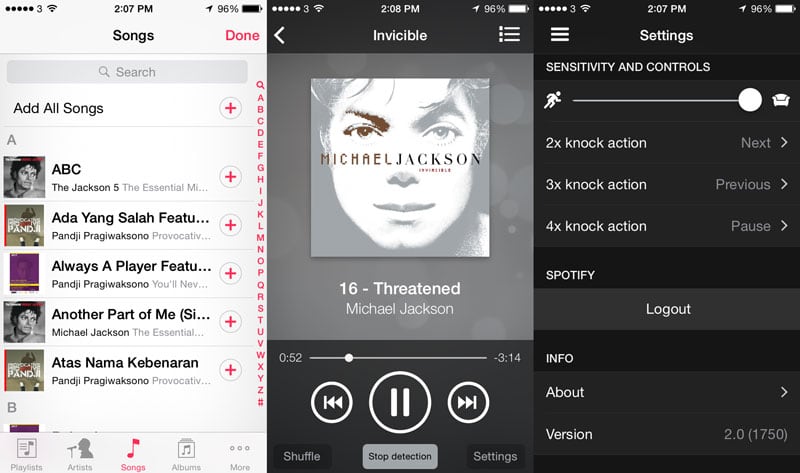 Here, you can change a song by only knocking on your iPhone! Amazingly cool :O

Probably the only music player out there that offers such an easy transition between songs.

All you have to do is knock a few times on the front of your iPhone and the song will change. It also offers everything that an iPhone music player has to offer: creating playlists, grouping songs by artist, album or genre. 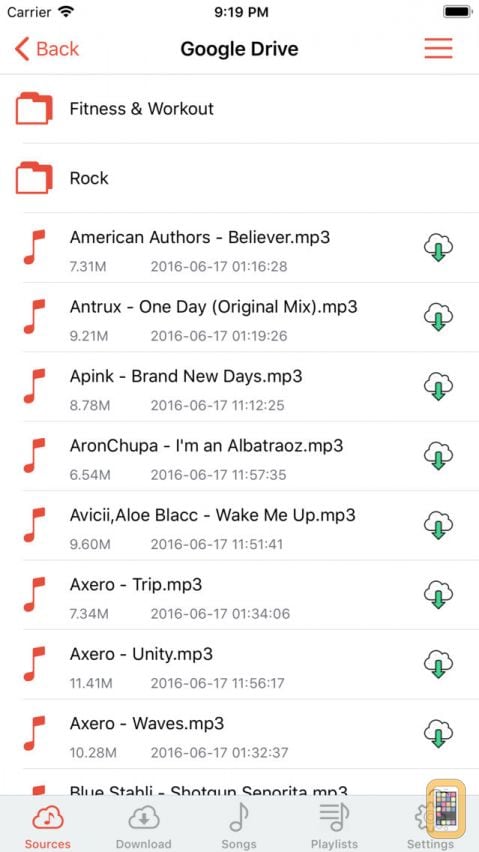 This service won’t fill your storage with music as it can play music stored in the cloud platforms like Dropbox.

This music app saves your storage space by playing your music stored on Google Drive or Dropbox. With this iPhone music player, you can listen to music on your iPad and iPod also.

You can add songs from your PC or Mac without iTunes, using Wi-Fi transfer. 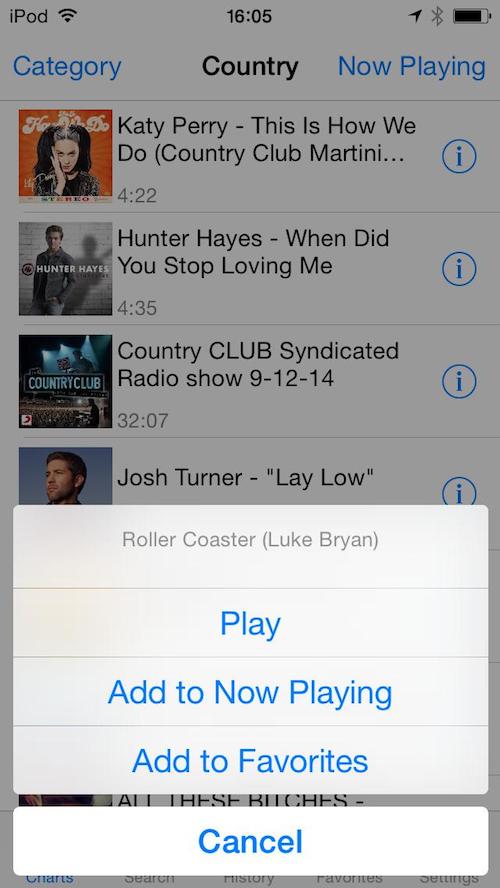 This iPhone music player supports FLAC format and also has an equalizer.

You can access your music on Dropbox or OneDrive and play it with Musicloud, for which you’ll have to pay $2.99. 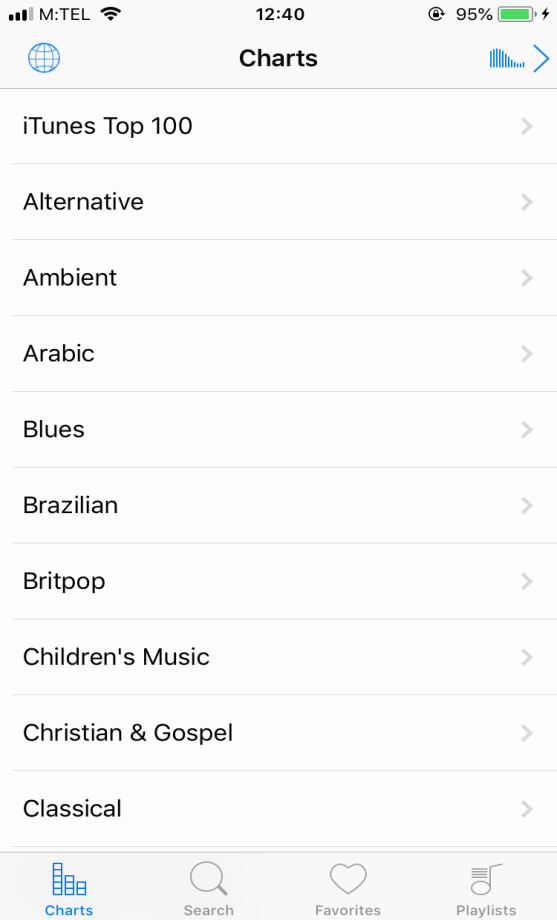 This player is full of nice features… and ads 🙁

Another free iPhone music player that you can use to browse for the latest released songs, with thousands of tracks already available.

Although it has many nice features, ads will get on your nerves soon.

Now that all of these great music apps are listed, we’ll let you decide which iPhone music player is the best.

Let’s just say that none of these can reach the level of stock Music app which is arguably the best MP3 player for iPhone and if you use it along with WALTR 2, you can enjoy uninterrupted and ad-free music no matter if you’re online or not.

Download
Previous article How to Watch Movies on iPad without WI-FI or 3G [NEW]
Next article 3 Quick Ways to Add Music to iPhone from Computer [NEW!]